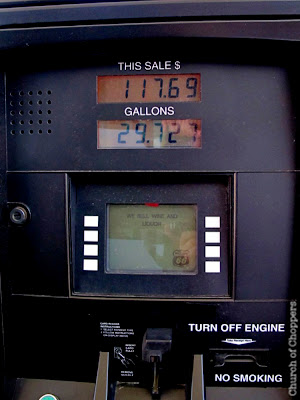 Email ThisBlogThis!Share to TwitterShare to FacebookShare to Pinterest
Tag: Ass grass or gas

Yep I feel the same way. 120 bucks for 330 miles of driving yesterday. Big white trucks like gas as much as big black vans I guess.

Big black pickups don't do much better, and I have a new 5.7 crate engine in mine....

But, I did haul a bike out to Flagstaff, and brought two basketcases worth of parts back with me, but fuck....

I can't wait to pull the trailer out for BF III. That should be cheap to do by then.

While you are all bragging about paying more than each other for fuel, the fucking oil companies are giggling with glee over a 50% increase in gouged profits. Time to stop accepting this shit as enevitable and kick these fucks in the head. Taking THEM to THEIR knees. Now that would be something to brag about.