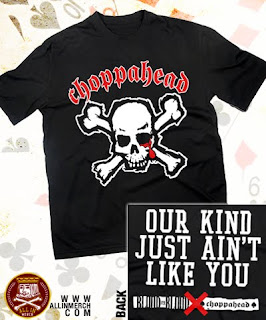 Last year we had a Choppahead 10 year anniversary party... my homeboys Blood for Blood headlined it - it was the first time they had played in the area in years. Ian from BFB suggested we do a collabo "mash up" shirt ... so here it is. We had some available at the show and due to constant pressure we caved and had a new run made up.... so get it now while you can!!!!
You can order it here at All-In Merch: http://www.allinmerch.com/product/B4BCHOPPAHEAD.html
BTW - Blood for Blood are currently in the studio working on some pre-production for their new album - with White Trash Rob back in the fold!
Posted by Big Truth

Fuck yeah! Stoked to hear they're in the studio!