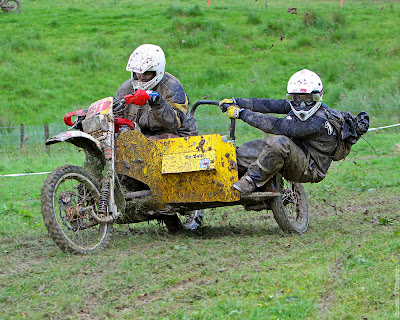 One of the oldest Enduro events in the world starts form the Lakeside at Llandrindrod Wells, the history of the event is incredible and the winners list reads like a who's who of off road riders.
The course is 130 miles ridden in one direction each day. 600 bikes in the Park Ferme start 4 a time at 1 minute intervals from 8am. Sidecars first, Sportsman, Clubman and followed by the experts.
The Route is classic and takes in some of the best off road spots in the welsh countryside. Locals stop with a program to wave and mark off the riders as pass. This is one event people mark in there calendar and enter year after year.

I have got to say this years event pretty much sucked due to the weather. I offered to passenger my mate in his VMC Yamaha sidecar in the expert class. That shit is hard work. We were holding on and special test times were good, but at the end of the first day we got stuck behind a German sidecar on a long climb and it all quickly turned to shit. We houred out in the last check of the day, the bike had a broken footrest, no brakes and I had puked and re swallowed it.

We called it a day!
Try again next year!
Anthony Brown
Co-Built
Posted by CHVRCH