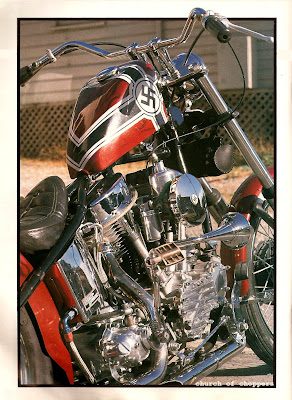 Email ThisBlogThis!Share to TwitterShare to FacebookShare to Pinterest
Tag: bike

I hate acorn nuts! My grandfather stepped on an acorn nut once during World War II and developed a really bad infection. He got better though. But, I'm afraid I must protest this bike nevertheless.

Can someone explain to me the relationship between acorn nuts and choppers?

Some people thinks its so cool to include acorn nuts on their bikes, t-shirt logos, whatever and wherever. In fact if you look in those old Easyriders magazines and the like, it's full of old ads with acorn nuts all over them. Live and learn I guess.

Acorn nuts were used as a symbol of good luck before you-know-who came along!

Those acorn nuts are imported (the bike is an Australian build) I can only imagine that there are a bunch of squirrels bitching about how acorn nuts should be gathered up and hidden and not be for public consumption.

What?
Acorn nuts are a pure hate symbol?
SWEET!!

Those sumbitches do cause a lot of pain and suffering though, I'll admit.

But what do acorn nuts have to do with Hitler?

I think maybe you need a hug, or at least a nice vigorous hand holding.

Acorn nuts fuck everything up, I know. I've had some on my previous bikes before and I couldn't believe it after I really thought about it. I took them off. Nylock nuts are way better anyway.


And to answer your question:

"I wonder how many people would be supporting it today if Hilter really won?"

Answer: If he won, a hell of a lot more! That's for sure. They would also be a lot more readily available in metric sizes. I can hardly ever find them in metric.

But wait a minute... why do acorn nuts usually only come in U.S Standard sizes? Holy shit. It can't be:

Acorn Nuts + *US* Standard = The Führer has definitely planted his seed deep in our country!

If he won the War and you didn't fit the profile you wouldn't be supporting him. In fact you would be praying that you lived. He/ they would turn on you like they turned on ever other allie they had. It's easy to support it now because nobody on the blog lived in the US in the 40's and really didn't know what it was like. Tell me how many outlaw bikers in the 40's were wearing that shit when the WWII was going on? Or had it on there bikes? Go to Gemany with that on and see how fast you get fucked up!It's a manditory 10 years sentence. I know guys who have it tattooed on there body and never riden a motorcycle, but have commited more murders than Manson. And I know guys who have it all over there motorcycle and couldn't fight there way out of a wet paper bag! It's easy to sit behind a computer and type that sit or post it. But let's be honest, how many of you are down with the Hindu symbol for peace gone wrong? How many of you are really down with putting another human in an oven and cooking them? Or taking a gun and blowing a big hole in the back of somebody's head when there down on there knees because of there ethnicity?

While it is true that Acorn nuts suck, they suck not nearly as much as that nasty ass, stoopit invention - the Pike nut. Wanna see my scars?

The Nazi swastika on the other hand, really sucks - nothing good about it and nothing funny. Everything about it and what it stands for sucks. Why the fuck would you even put it on a bike you worked hard to sweeten? You put it on a bike and you suck instantly. Dumb, dumb dumb - since half of us would wind up in ovens if that shit had gone differently

Between Acorn nuts, Swastikas and AN fittings, I am ready to move on.

I think that those acorn nuts and the bike are from Sweden.
Ha Ha!

I just love the fact that acorn nuts piss off the squares.

Oh shit, I mean, it's me. Not anonymous. Now everyone knows I like acorn nuts and I support the acorn regime.

Uh, Manson diddnt actually kill anyone. He was never given a Jury trial either.... Why? because the D.A. thought he would "hypnotize" the jury.

I dont give a shit about acorn nuts.. CORN nuts on the other hand, yum!

That big horn is gay!

I'm hungry too. I don't like acorns or swastikas. Gay horns don't bother me. I guess I'm a square. Can anyone tell me how to be cool and who I need to follow to be accepted? Thanks everyone. Now let's GRIND NELSON!

Nice bike and paint theme.... i would ride it up and down gaza strip to piss off the other side!!!