Russell Collins is nice guy, I like hanging out with him. We've both been busy the last few years (especially Russell!) so we don't get to hang out quite like we used to.


Recently I found out that he got a Dyna that he hopped-up a bit. I saw it for the first time at our 4th of July Liberty Shindig. Then just the other day I got an email from him with this photo; him messing around the neighborhood, popping wheelies: 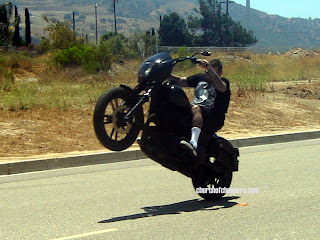 July 2005, The Horse #51: I shot Russell and his panhead and had ChopperDave co-write the article with me. I lived right next to a nature reserve in Costa Mesa, CA where I finally saw my first real life coyote, racoon and skunk (there are no mammals like that in Hawaii). This is where I shot this feature. 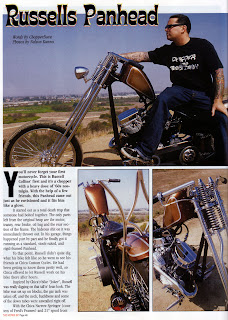 I miss living next to the nature reserve but I kinda miss Russell's panhead too. I dug it. Chica and I raked and stretched this frame. I remember sitting at the lathe for a while making slugs for it. Russell handled the rest of re-assembly. 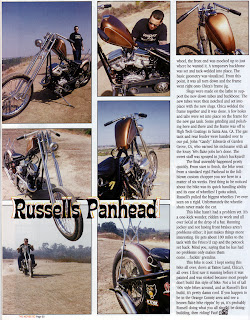 He was one of the few friends I had that was running a Linkert, which got me even more interested in them old carbs. 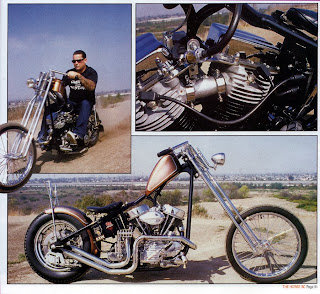 It's only been 4 years since this issue hit the stands. So much has happened since then, feels like a lot longer than that.

Ive LOVED that bike since i read the article..the wheelies would have been fun for sure

That Pan was very rad indeed. And yeah, A whole lot happenend, and changed, since then.
I dig that Dyna a lot too... Cool bike.

Oh the good ol' days..... Good seeing you at the party Russell!!