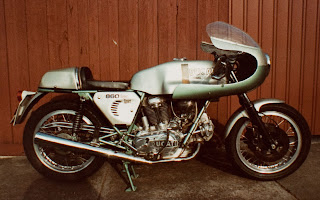 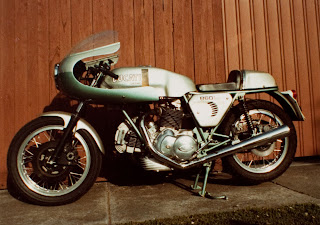 Photographed in 1979 this Ducati was bought in a Ringwood car yard for 1800 bucks in 1978 and restored at the time by Mark Leveret.

History
This is the Ducati built in 1975 by Eddy Lopez and Ron Angel at Rons shop in Bridge Road, Richmond. The first of the round case 860's it was worked up to 900 and campaigned by Ken Blake in that year.

To quote Ron Angel... 'I entered him at Bathurst on a Ducati 860 in the Open Production race at Bathurst Easter 1975. But on the Friday he crashed at the end of Conrod Straight. Hit a little patch of gravel or something and trashed the bike and himself. He was really badly injured but he started the race anyway. Being a kick start it was always going to be hard, but Ken had hurt himself down his right side so he had to kick start the bike with his left foot instead. As a result he was absolutely last away. But he ended up winning the race by more than half a lap, seriously injured though he was! At the end of the race we had been told that the first 3 placegetters would be scrutineered so, on the slow-down lap they motioned Ken into the back gate of the pits and one of the officials came up and said, ‘That bike is illegal, you can’t beat a field of 1000cc bikes with that.’ So we went to scrutineering and, of course, the bike was completely legal. There were lots of red faces that day.”

What happened to the bike?
After these photos were taken the bike was given to Mark's brother, he rode it for a few years then parked it in a chicken shed where it has stayed for a looooong time. The bike was recently pulled out of the same shed in a very sad state and Mark is getting stuck into it for a second time. (Note: I'll post some photos of this sometime)

As for Ken Blake - he left Australia in the late 70's to race in Europe and sadly lost his life in the TT at the Isle of Man in 1981.
Posted by Micro