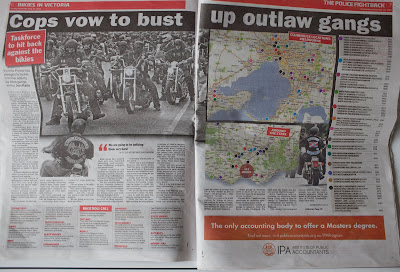 Last year in all our collective wisdom - Victoria voted in Ted Baillieu's conservative government on a law and order ticket. So the fun has started... He has told the police to go hard on the 'bad' bikers. Two stories - 1. On Easter Friday a couple of million bucks of public money was spent busting up the Black Uhlans Poker run (which was raising money for the Children's Hospital). Over 400 riders and bikes where photographed, breath tested and road checked. - (with six tickets issued - fiscal policy at its best). 2. The Commonwealth Bank has shut down all bank accounts and bank loans that are club or club member related. The other big banks are following suit. And... in other news to hand - Ted wants to outlaw 'mother fucking' swearing in public and lock 16 year olds up for a minimum of two years if they get in the sort of fights where peoples noses get broken.

Email ThisBlogThis!Share to TwitterShare to FacebookShare to Pinterest
Tag: i've got a soap box, mum always washed my fucking mouth out with soap, Oz, police are really smart and politicians are smarter

strippers in cages are great